There's no biz like show biz for Alistar. Always on…

Igloofest returns at last, making up for a two-year gap. The unique winter festival, globally recognized is celebrating its 15th anniversary. A deluge of well-known electronic artists, rising stars, and key figures from the Montreal’s nightlife will congregate in the Old Port of Montreal from January 19 to February 11, 2023, for a supercharged reunion.

For the occasion, the electronic music event offers several new features, including après-ski evenings, all warm in various Montreal locations. The Igloofête family component will also be presented on four Saturdays. But first and foremost, Igloofest is 12 festive outdoor evenings with several DJs from here and elsewhere.

Lots of talent requires big decisions if of course one doesn’t have a festival pass. That’s where Best Kept MTL makes your selection a bit easier having combed through the entire lineup. Here is what we came up with in our TOP 4:

House music saw a revival when Liverpool duo Camelphat with their biggest hits Cola and Panic Room. The intricate drum patterns, funky bass, and driving chords spoke to the direction that commercial dance music would take as the dreadful “beach house” and EDM genres came to an end, earning them a Grammy nomination for best dance recording a year later (LCD Soundsystem won).

Expect a well laced set with consuming visuals and transcendent drops; discover the craft and work placed into curating the CamelPhat experience!

If Daft Punk were the party music of the mid-2000s, Kavinsky would sound a lot like that. His music is a hedonistic mashup of house music, escapism, and 80s Miami Vice-style rock that sounds like a spiritual continuation of where Cross-era Justice left off.

Kavinsky’s producing approach is evocative of 1980s electropop movie soundtracks. He states that the thousands of films he viewed as a child served as the inspiration for his music, and that he has taken the greatest elements from each film and combined them into one idea. Close your eyes indulge in the spirit of his music, which combines dark, noir sounds with the washed out synths of the Reagan era and saccharine arpeggios.

Time slot: 10pm at the Sapporo Stage on Thursday, January 26

WhoMadeWho, known for their exceptional mastery of emotional depth, heartbreaking melody, and inventive composition, have made a name for themselves as one of the most influential underground bands of their generation in the years since their formation.

The Danish electronic band also gained worldwide recognition for its outstanding performances at festivals including Roskilde, Sonar, Melt!, Burning Man… and now ready to warmmm things up at the coldest festival of our time!

Time slot: 9pm on the Sapporo Stage on Friday, February 3

German prodigy Ben Böhmer, the 28 year old DJ and music producer has always made sure to move forward steadily, securing himself a solid position and a well-deserved spotlight. Böhmer quickly distinguished himself from the other newcomers to the charts with his unmatched talent for writing stunning and profound songs.

Live, his performances make a lasting impression. The highlight was the incredible performance he gave for Cercle while performing from a hot air balloon in Cappadocia. At Igloofest his world of melodic, organic, and progressive house is sure to keep you warm, fuzzy and tuned in!

The hottest party of the winter is ready for a spectacular edition, so break out your neon attire and your most extravagant dance moves, warriors of the cold, extreme weather is here to stay for 4 weekend editions! 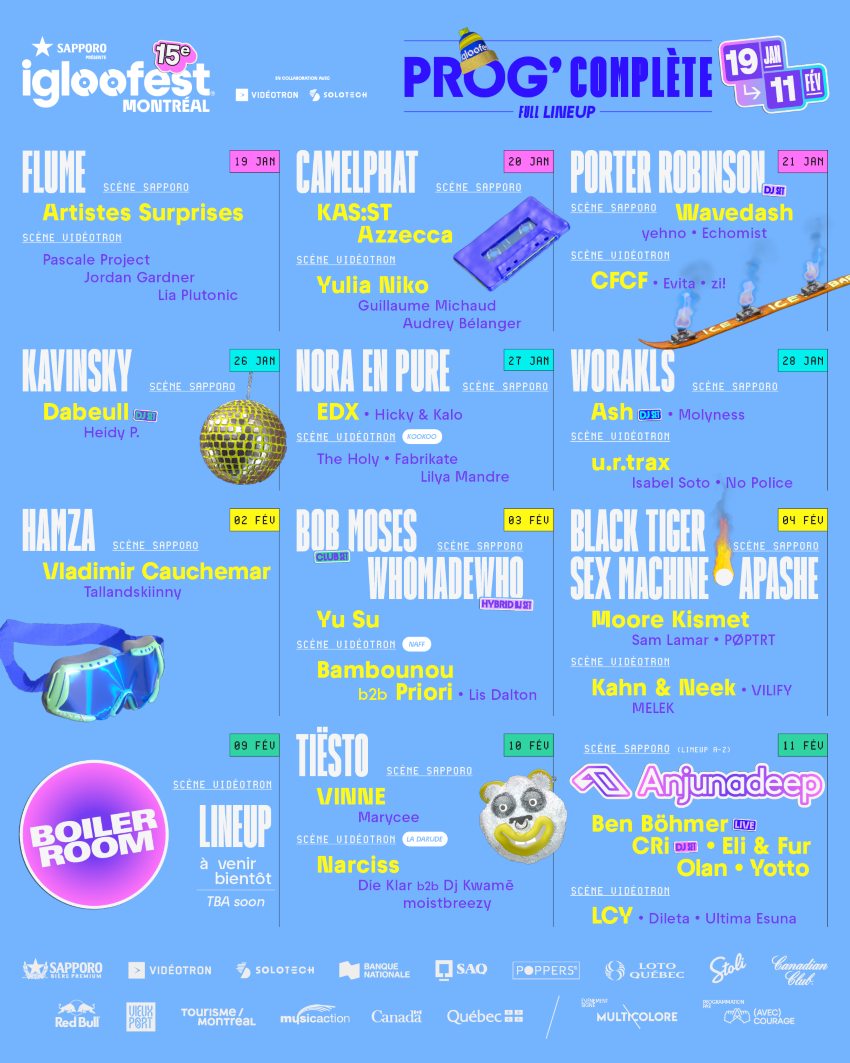 What you need to know about Igloofest 2023

Date: Thursday / Friday / Saturday from January 19 to February 11, 2023, from 7h30 to 12h30AM
Location: Quai Jacques-Cartier, Vieux-Port de Montréal
Tickets: $49-89. Some nights already sold out! Get yours here
Packages: Live one of the most unique experience in the world. Several exclusive packages here
Dress Code: Hit your nearest thrift store! Inspire yourself from some ideas here
Facebook: https://www.facebook.com/igloofest/
Instagram: https://www.instagram.com/igloofest_mtl/

For chiller, down tempo sounds discover a unique immersive concept that celebrates the long partnership between Hennessy and hip-hop. Click here for more on the Hennessy Soundbox at the W Montreal.

There's no biz like show biz for Alistar. Always on the look out for society's movers & shakers, discovering their latest ventures. Signature move: delivering short & concise content for your reading pleasure.

Igloofest 2020 | Twist of Hotness at the Coolest Winter Music Festival