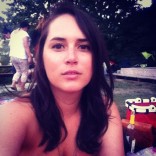 Whether you speak French or not, there is something infectious about Parisian-based electropop band YELLE’s songs.  And if you understand French, you  know this sweet sounding girl has a very dirty mouth.

Singer Julie Budet (known now as Yelle) and producer GrandMarnier AKA Jean Francois Perrier, began making music together back in 2005 under the name “YEL” which stood for “You Enjoy Life”.  The name was soon feminized to YELLE because a Belgian band already went by that name.  That same year, they got lots of buzz on MySpace after they posted a song called ‘Short Dick Cuizi’ (which later became ‘Je Veux Te Voir’).  The following year, YELLE began recording their debut album titled ‘Pop Up’ and brought producer Tepr into the mix.  The French only album was released in 2007 and gained attention throughout the world.

YELLE released the first single of their sophomore album ‘Safari Disco Club’ (titled the same) as a taster of what was to come  two months prior to the release of the album.  Being fans of the first album, this one does not disappoint.

Smack in the middle of YELLE’s North American tour with French Horn Rebellion is a stop in Montreal.

M for Montreal | Janette King: A New Queen on the Board

The Global Grooves of Thievery Corporation

5 Best Montreal Entertainment— High Octane Ideas to Get You Out of a Winter Rut!